An infographic to look back to the 2017 shows the ad tech and media industry is consolidating and simplifying models and what could we expect in the next 2 years.

Today the digital advertising market is mainly technology and strategic moves from players which try to fight the duopoly Google and Facebook. 2017 has been clearly a year of consolidation of business models, and showed many acquisitions, mainly from the US market affecting Europe’s digital landscape.

Hereby the infographic which shows some highlights of the 2017 M&A deals, divided per month. 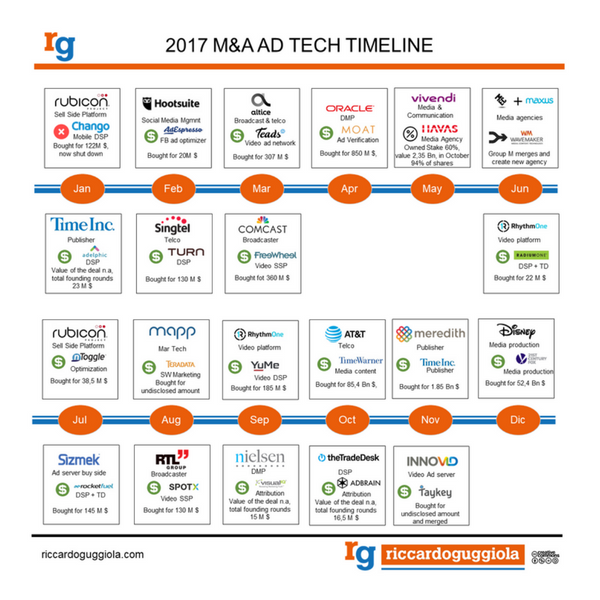 Worthy to mention is the Disney acquisition of Fox, the deal includes also the 60% of Hulu. Disney strategy is to own more content and distribute it. Maybe it will become the main rival of Netflix for content fruition of OTT content. In 2018 and the following years, I expect broadcast will evolve in an hybrid version video content distribution where users watch using multiple device and on demand and the Disney move make perfect sense in this context. Try to mention another player which is doing the same. Yes, Amazon is considered to become the most potential competitor for Facebook and Google in the advertising, with the advantage that it knows what consumers actually bought. Amazon is also making own content, and the farsighted Google did not like it. If you are thinking to buy an Amazon Fire TV, well, you cannot install the Youtube app.

The digital world VS the Duopoly

As Google and Facebook are interested in becoming incumbent in media production also for live events, broadcasters and operators acquired ad tech companies to manage their inventory for the next generation of users. RTL Group bought SpotX and its plan is to merge it with Smartclip, which bought a year earlier. Same thing happens for Comcast, which early in 2017 bought FreeWheel (formerly Sticky Ads).

M&A in digital advertising seems to bring also this clear statement: if you started on the sell side, you continue on the sell side and try to better manage the audience as better as you can. Lesson learned by the incumbent SSP Rubicon Project, which bought in 2016 Chango to try to enter the buy side market albeit without success. In fact, in the early 2017 they sold the business and got back in what they are good at.

Foreseeing the future by 2020 (prediction made January 2018)

The advertising landscape will drastically change within 2 years. By 2020, half of the ad tech players represented on the LumaScape will rebrand, drastically reconsider the business model or declare bankruptcy.

The reasons of my prediction is supported by 3 main pillars:

The business models will evolve accordingly.

My digital generation is used to liquidity and changes, but we don’t have to forget the most important thing: the user. And eventually the secret relies on time the user have to dedicate. M&A in the next 2 year, will happen only if companies interested in selling will demonstrate to their acquirers they can build engagement and a positive relationship with the audience.